There’s no party like a Fab 5 party because the young men of the Pebblebrook varsity basketball team just won’t stop. What a night in the Kay Jackson gym as the Pebblebrook Falcons went mad in their midnight madness exhibition game against the DM Therrell Panthers.

With a very intense game going, which seemed more like a fight for the state championship rather than a pre-season scrimmage, both teams put on a great show displaying a tremendous amount of athleticism and skill.

Towards the end the 2nd quarter Kaleb Washington hits a “Sorry Miss Jackson this DUNK is for real”, assisted by sophomore guard Andre Young giving the Falcons an equal playing court at the half with a score of 33-33. And the excitement didn’t stop there. With 1:26 left on the clock in the 3rd, Washington handles another hanging dunk putting the Falcons up 49-48. 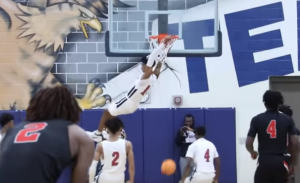 Then the Falcon fight showed up with 2.8 seconds on the clock. After the Panthers hit 1 of 2 from the free throw line, the Falcons take advantage and “Boogie Down” Danny Stubbs hits a half court shot at the buzzer ending the regulated 73-73 sending the game into overtime.

With more time on the clock the Falcons kept the fight in them. With 14.5 seconds on the board Andre Young evens the playing court with a jumper bringing the score 81-81. After going into overtime the Panthers wanted to seal the deal once and for all and junior Robbie Armbrester made a bucket bringing the Panthers up 81-83.

Jamall Clyce makes it down the court to hit his famous mid-range jumper sending this extraordinary scrimmage into double overtime 83-83.

One of the Falcon mottos is Expect Excellence and what an excellent display of athleticism there had been in the Nest. With a learning loss of 90-94 the Falcons have nothing to hang their heads about. For fans and faculty…this had been a grand opening to the beginning of a fantastic season.

To watch highlights from the Pebblebrook vs Therrell scrimmage click here