1,7,8,10…No these are not the Georgia Cash 4 lottery numbers, they’re Pebblebrook’s Cross Country results from the South Metro Classic #4. There were over 50 participants in yesterday’s 2 mile race and the Falcons came out on top with four participants finishing in the event’s top 10. 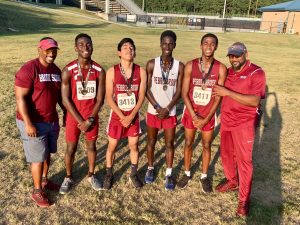 “I was nervous because although there were other teams Westlake was my main concern because they have talented guys and we’re rivals,” said Mamadou. “So I knew that this was going to be tough and also we had a workout the day before so my legs were still a little iffy.”

Although a little “iffy” his legs worked out perfectly fine. Not only was his time the best time of the day but Mamadou finished about 100 meters ahead of second place finisher Taylor Battle of Westlake High School. “I felt like it was a race I finally deserved to win because I know I put in the work for it.”

Mamadou says he was excited about the win but didn’t celebrate too hard. He says he has to see them (Westlake) again and there is still a lot of work to do.