The theme of the night was a tropical one as the Pebblebrook Falcon fans adorned the stands with tropical lays around their necks and heads. Excitement and anticipation filled the air and the Varsity football team brought a big victory back to Mableton on Friday in the Battle of the Nest against it’s community Rival South Cobb High School.

“We just wanted to come in and play our game,” new head coach Leroy Hood told the Marietta Daily Journal. “We didn’t want to get too caught up in the rivalry or anything. We wanted to be disciplined and make sure we were playing smart.”

“Taking advantage of those turnovers was huge,” Hood said. And it paid off for the Falcons in the end. They scored 23 more points to end the game in a 37-13 victory and returned the Nest trophy back to it’s rightful spot on the Pebblebrook campus. 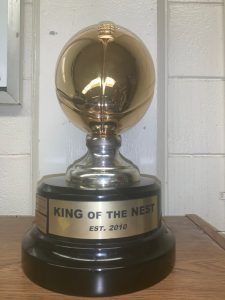